Influenced by the work of artist Joseph Cornell, writer Vladimir Nabokov, and philosopher Walter Benjamin; Guy Livingston has been building self-contained boxes for several decades, but very slowly. Most of these are evanescent, and only exist long enough to be filmed and then recycled. One was sent to Paris and did not come back. And one is going to the moon.

Frequently these boxes use a multimedia approach, as with his one-minute videos. The music for each of these miniature films is by a different composer. The videos were designed and produced in Den Haag by Guy Livingston and “Newt Hinton”. They were filmed in Amsterdam. All the boxes incorporate movement in addition to the musical soundtrack; the potential energy of inanimate objects is explored in a playful or sinister way. Balls roll back and forth inexplicably; wood is consumed by violent drilling; objects burst into flame; and old-fashioned turntable begins to smoke as it plays a mysterious record… 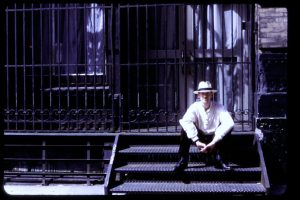 For Crying Out Loud (McGowan)