As you might know, I completed 120 episodes of American Highways last month, but a lot of listeners have wondered what I’m up to. Well, this week I’ve been working a lot on architecture and music. 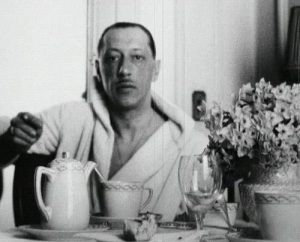 Stravinsky never was much fun before breakfast

background: Music for Airports, by Brian Eno, a masterwork of ambient music.

Architecture is about creating borders in space. These borders, whatever their design functionality or ornamental value, also have acoustic effects; amplifying, diffusing, reflecting or dampening sounds.

Music is inevitably distorted by the borders of the architecture around it. In Carnegie Hall, these distortions are evaluated as perfection for classical music, but other types of music are not favored.

David Byrne of the Talking Heads, wrote about a performance he gave at Carnegie Hall:

“this acoustic barrier could be viewed as a subtle conspiracy, a sonic wall, a way of keeping the riffraff out.” And to his regret, it turned out to be an awful acoustic for one of his concerts. Meanwhile, no classical musician would feel comfortable in Byrne’s favorite venue, CBGB, an underground club with all the warmth of a garage (and not much larger). The artistic responses to that space launched a major strand of 1980’s alternative rock.

The question of borders is of crucial importance. Dutch artist Hans Venhuizen writes: “Even places that seem to function properly, like shopping malls and airport terminals, can only uphold that image by manipulating and conditioning the users and even more importantly, by excluding the ones that do not fit the ideal picture.”

And exclusion is also a manifestation of silence.

closing music: Houses in Motion, by the Talking Heads.

Klaus
as lead by a ghost hand, I clicked for the first time on something in your email podcast, Guy, (I am sorry and I regret, that I didn´t do it before). After I had some difficulties, then suddenly I heard the voice of Guy and after some music from Chris. I am very happy and pleased, beautiful music, discussions in the spirit of late parisien evenings.
prevnext
Find Something